Posted on June 2, 2015 by GamesandGrinds 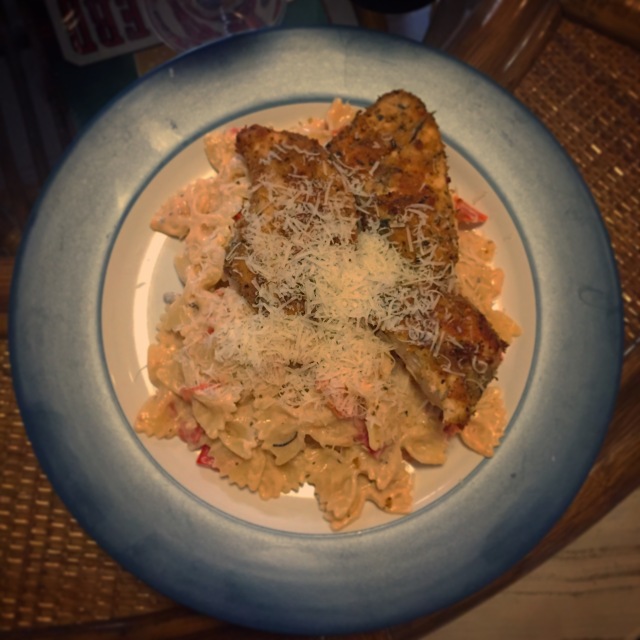 We cook a planned meal… Eh, maybe 4 times a week.  We keep a pretty well stocked fridge and make the occasional grocery run to complete the meal when we need.  The other days of the week are usually frozen pizza, take-out or leftovers.  But the worst, the WORST is that night that comes along where you just have nothing in the fridge.  Or at least nothing you think you want to eat.  I think that’s what made this recipe especially fantastic, because it was so unexpected.  We didn’t have a dinner plan, just some chicken that was getting close to the use-by date and some random veggies.  It turned into one of the best pasta meals, and really, dare I say best meals, we’ve made.

We started by deciding we wanted crispy chicken.  I found this recipe that seemed easy and tasty.

I was a little skeptical about the olive oil base but it helped with making it a little easier and less messy than the typical egg or milk base.  We didn’t have Italian breadcrumbs in the house, but it’s not hard to whip that together with some garlic powder, rosemary and other seasonings from your cabinet.

While the chicken was in the oven I started on the pasta.  We had about half a box of bowtie pasta that we cooked up.  Next I moved onto the sauce.  We had some red bell pepper in the fridge, so I chopped that up along with some large pieces of garlic and mushrooms.  I sautéed those in some olive oil and rosemary until they were just about cooked down, and then added the pre-cooked pasta to the pan.  Once the pasta and the veggies were mixed I tossed in alfredo sauce, adding just enough for it to get a nice thick coat.  I let it cook down for a few minutes and then added the special ingredient, about ¼ cup of goat cheese.

The combination of the crispy chicken, the subtle but flavorful veggies, and the thick creamy sauce make a BOMB.COM dish.

Pasta: It can really be of your choice but I like bowtie because I think it holds the weight of a creamy sauce well.

Sautee the veggies in olive oil and then toss in the pasta.  Mix with sauce and goat cheese and enjoy 🙂

Oh, and cover EVERYTHING in parmesan.