Nintendo’s unveiling the NX tomorrow and it’s time for some predictions.

Posted on October 19, 2016 by GamesandGrinds 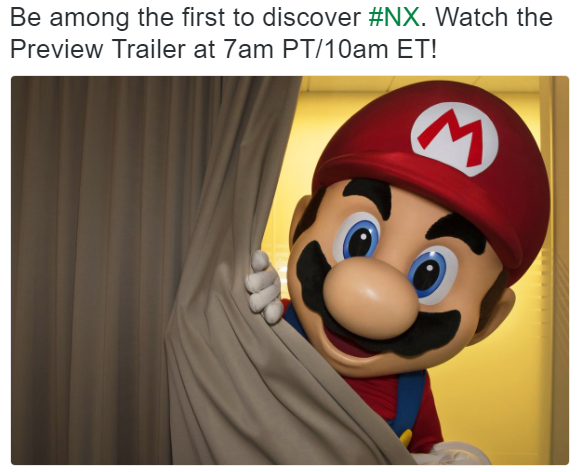 No need to pinch yourself, that tweet is real. This week we’ll get our first real look at the long-awaited Nintendo NX. Even the announcement of a preview trailer has managed to set the internet on fire. It’d be wrong not to get in on the speculation game, so here’s a handful of our totally baseless and unqualified predictions.

Expect classic Nintendo-brand function over form, and it’ll pay off this time. That’s not to say I don’t think the new console will be powerful when it comes to hardware. The question is how that hardware will be put to use. If the persisting rumors about the NX being fusion between a home and handheld console are true, I expect the NX to build on the Wii U’s tablet design by consisting of a handheld mobile console capable of docking with a home hub-console.

That isn’t an original bit of guesswork by any means, but it’s my prediction all the same. The trick to this prediction is the cost. Nintendo has always tried their best to be the cost-efficient option in the console market, and hybrid hardware sounds pricey. That said, New 3DSs can regularly be found for around $150, and I don’t think the mobile half of the NX would require much more power than a New 3DS. If they topped out at a similar level Nintendo could reasonably keep the NX within the $300-$400 price range, have a pre-installed userbase, AND leave the door open for potential Wii U backwards compatibility.

And here’s where today’s NX daydreaming went slightly off the rails. What if the mobile console were capable of streaming games while away from home? The cost of hardware to do so might kill this idea, but it seems an appropriate feature of a console so heavily rumored to blend the features of home and handheld. Imagine having the ability to play a console game at home, then travel and still have the ability to finish your game while streaming over wi-fi. That would be a game changer in the home console market and truly set Nintendo apart from MS and Sony. I’ll fully admit this is more of a wish of mine than a true prediction, but hey it could happen right?

Lastly, I expect at least one if not two major non-Zelda franchises at launch. I actually believe this explains the long lead-time for the NX’s announcement/release. After heavy criticism of the Wii U’s game library, it wouldn’t shock me if Nintendo decided to put some extra care into cooking up a few big names to launch their new console. We already know about The Legend of Zelda: Breath of the Wild on the NX, but a few other games have either been confirmed in development (Pikmin 4) or heavily rumored (new Super Smash Bros). Launch with those and a few 3rd party offerings (oh yeah, let’s just predict 3rd party developers will be on board this gen too), and you have the makings of one of the best console launches of all time.

So there it is. A handful of half-baked thoughts more akin to wishful thinking than real predictions, but it’s still something worth chewing on while we wait for Nintendo to truly unveil their latest creation. Happy hoping Nintendo fans, and check out the blog and our Twitter feed over the weekend to see our reaction to the week’s news.